You used to live in sin, just like the rest of the world, obeying the devil–the commander of the powers in the unseen world. He is the spirit at work in the hearts of those who refuse to obey God (Ephesians 2:2). When you make deals with Satan you are powerless to repay. There is only one power on earth greater than his and it is not in good magic. Good magic, like dark magic both require rituals/sacrifices for power. Do you know why? Because its demonic. I don’t have to sacrifice chickens or humans or do weird rituals for power, I simply walk in the spirit of God.

Kim Kardashian and her family as many already know are high profile pawns. She is saddened by the events concerning Kanye West and has petitioned to the spiritual powers to be merciful, but Kanye is trying to move away from the reservation and is being punished for his insolence. If he refuses to submit he will face a frightful end. His best option is to fall on his knees and plead his case before Jesus before he loses his soul. This decision is unlikely, as Scripture tells us that “it is easier for a camel to go through the eye of a needle than for a rich person to enter the Kingdom of God” (Matthew 19:24).

You should take your own soul very seriously and watch over it. Many pastors are not watching over your soul. They are teaching demonic doctrines to keep the doors open as the world moves toward the servitude of thee antichrist. 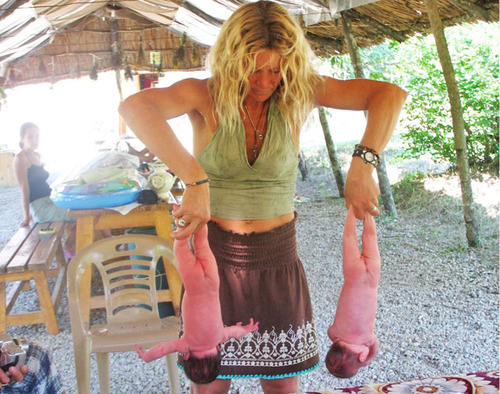 Baby yoga and yoga in general is demonic. I have cast demons out of people who attend their worship centers. You will notice this teaching in Avengers and Captain America. Satan is working very diligently to deceive the masses and right now he is twerking from all of his success. This wicked woman twists her baby and shakes her child up and down like a toy. How far will we go? God said, the imaginations of mans heart is evil continually. Come Lord Jesus. Have mercy on this child.