I saw the puddle of blood’: 15yo girl commits suicide over nude Snapchat pic 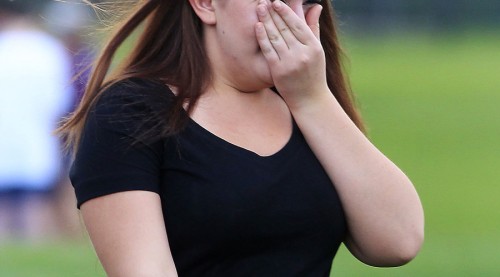 A 15-year old Florida girl has committed suicide after a friend posted nude footage of her, taken without her permission, on social media. The girl’s family is seeking justice, but the police reportedly see no links to bullying.

Tovanna Holton, a freshman at Wiregrass Ranch High School, killed herself with her mother’s gun on Sunday.

“I couldn’t get in the bathroom,” her mother, Levon Holton-Teamer, told Tampa NBC-affiliate WFLA. “The bathroom light was off so I tried to get in and I looked down and I saw the puddle of blood. I tried to apply the pressure, the pressure to her head. I tried to save her.”

The girl’s mother recalled the last conversation with her daughter, who, she said, could not bear the humiliation.

“Tovonna would say, ‘Mommy, I owe them; I owe them’. I said, ‘What do you mean you owe them?’ I couldn’t understand what was wrong,” Holton-Teamer told reporters.

In search for answers, Tovanna’s aunt went on Facebook and found out that the niece’s close friend posted a nude picture of her taken in a shower.

According to The Daily Beast, Tovonna’s ex-boyfriend recorded a video of her in a shower and then posted it on social media without her permission. After the footage surfaced on Snapchat, people began taking screenshots and sharing them, a friend Zoe Vereen recalled.

Tovanna Holton, a freshman at Wiregrass Ranch High School, killed herself with her mother’s gun on Sunday.

In this hour of filming everything parents need to be extra vigilant in training their children. The devil has been given physical and spiritual legal licenses to harm your children. The more laws made that are evil and antichrist, the more of these things will occur, this is only a tip of the iceberg. Raising a child in the admonition of the Lord is not automatic, it is systematic. You are purposely guarding and filling your children with wisdom to deal with the wicked people they will come across throughout their life. The wicked outweigh the righteous so taking shortcuts will be costly. Always bathe your children in prayer as they leave the home and make sure they know how to hear from God early and by themselves. It is so important in this hour.

This entry was posted in MEDIA and tagged Death, shame, suicide, wickedness. Bookmark the permalink.

One response to “I saw the puddle of blood’: 15yo girl commits suicide over nude Snapchat pic”